Thank you Samta! One of our readers just sent an email that's more fun than Christmas...

We're not actually sure what film the first photo is from, but we're quite sure that it is from a film because there's no other explanation as to why Karisma and Salman are standing in this position while so poorly dressed. 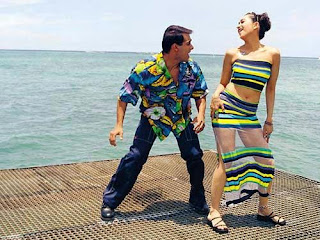 Then there's poor Akshay who obviously angered both the costume designer and promotional photographer while filming Waqt. (Personally, I don't think his boobs are real.) 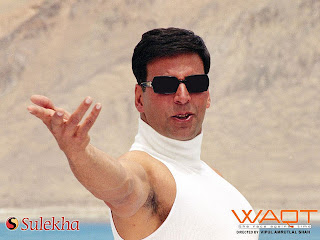 The mistress of this blog gave me the ok to hijack our very fulgy home to crosspost something from my blog:

Michael, Beth and I have come up with this cool idea.

There will be the first Pan-European/International-Bollywoodblogger-Meeting in Vienna (that would be Vienna, Austria) on Saturday March 10th. And you´re all invited.

Kyun? Because we can. And because Beth will be visiting Vienna then. And since that is a very special occation and calls for a celebration anyway and since Michael invited himself too, we thought, hey, why not meet all of us?

So far I already have almost definite consents from some very cool
people and I hope you will have time to show up too!

Head over to my blog or to www.bollywoodbloggers.com for updates. The
next few days should bring more info about program, participating BW
bloggers and accommodation. And if you have any questions or suggestions you want to propose on the sly, feel free to email me at babasko [at] gmail [dot] com

UPDATE 1/31/2007: Yaaahooooo! Great feedback and already an impressive (if a bit heavy on the germanspeaking side) line-up. Beth. Michael. Marco. Maini. Oliver. Kaddele. Maria. Birgit. Maja and "my" complete Viennese BW gang.
ad Accommodation: If you´re short on funds. Don´t worry. As long as you make it to Vienna, we´ve got a couple of sofas for you (Not that there´s going to be much time for sleep)

We aim to please here at Bollywood Fugly.

This is supposed be a "seduction sequence"... but how many people do you know who are turned on by a royal blue, sparkly mini-dress with accompanying sheer shrug-like garment?

Ladies and Gentlemen, it has happened again - another late night comedy show with fake news has done a Bollywood story! Last night on Saturday Night Live, during Weekend Update, Amy Poehler did a segment on the upcoming wedding of Abishek and Ash (painfully pronounced, of course!) with a "Brangelina" name-combo of "Aishwarishek" - a rather weak punchline, but it's interesting that this is becoming a recurring theme in comedy news.

Last night on The Colbert Report, Stephen Colbert re-MEdiated several celebrity feuds. It seems as if a number of Bolly-philes sent in their comments and suggestions.

Everyone said Shaadi Se Pehle (2006) was awful - but you knew you could trust me to throw myself on that grenade, na? Let me tell you it wasn't nearly as bad as I was expecting - and it was certainly better than Aap Ki Khatir - and I did get some fashion gems for us in the process. This movie has a really wide array of costuming going on, with Akshaye and Mallika getting the worst of it, although he has some really nice clothes too, and since she's the sex bomb, it's not surprising she looks like a (naked) train wreck half the time. Let's just get that out of the way first. Here she is in her first scene ("Dil Vich Hulchul" or "Ankhiyon Se Gal Kar Gayi," depending on whether you ask the DVD menu or raaga.com). She's wearing a silver bra top and tiny skirt with a silver mesh...well, apron, I guess you'd call it. Note how it isn't actually a dress and is just a front. 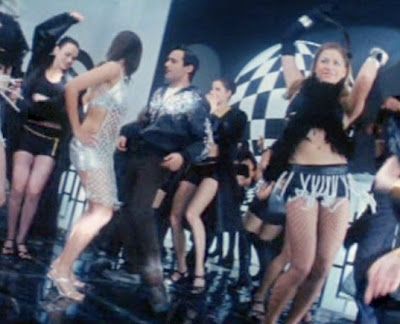 The backup dancers fare no better; you'll see two in front here wearing flared satin legwarmers. Hey Desidancer, do you know if there's a name for these things? I mean, they're clearly not to warm legs. They're like overgrown spats or something, and they flap when the dancers kick. 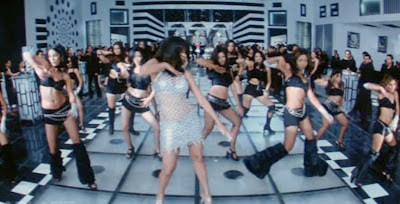 The girl to Mallika's left looks like she's wearing the moon boots of a person twice her height.

Though I do like her crocheted elephant beach hat.

On to my favorite part of the movie: my FPMBF (that's "Fake-Pretend Movie BoyFriend," in case we have any new readers). His outfit that I complained about back before the movie came out is just as bad in the movie (in the first song, "Kabhi Mil To") as it is in the publicity stills.

It's possible that this is supposed to be silly; this song is set up with a wink-wink reference to how couples in Hindi films embrace and then break into duets, so it might be a parody of the song teleport to Europe. Not sure. Poor Ayesha wears the same white lace-up boots with at least three ensembles, possibly four. I do appreciate the economy of reusing costumes - and heck, we all have a favorite pair of shoes. Boots of this height often get mis-paired, I think, and her costumer fell into the trap, particularly with the cuffed-at-the-knees bleach-smeared jeans (bottom right), which make her look stumpy - but hey, at least she's got a kicky umbrella to match. 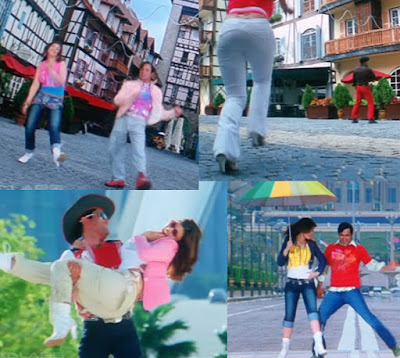 If you go to my old post about these outfits, you can get a really good look at Ayesha's jeans with a giant sparkly butterfly on the front - in the collage above, they're in the top left picture. In mid-dance move it just looks like she's wearing a longer tunic-type top, but when she stands up straight you can see it's actually a cropped top with a butterfly on the pants below - oh of course, that makes sense. This is one of those times when I think some costume designers - in this case Ashelee Rubello, who is also credited with Ishq Vishk and Josh, which feature, respectively, the Worst Shirt (Male) in Bollywood and a gang leader toting his gun in a name-emblazoned fanny pack - may have actually lost their minds completely, even if only momentarily.

Also, Akshaye dresses like a cowboy for no apparent reason.

Isn't it awesome how the front bits are tied together to show off the belt buckle? Once a friend of mine was at a party, and, spotting someone walk in wearing a very natty ensemble and Elton John-esque sunglasses, yelled across the room to said person "How gay are you?!?" (Fortunately he is both very good-humored and very out of the closet.) I said that at the screen right here.

Later, Akshaye's character, who is trying to wriggle out of an engagement for noble reasons (let me just be quick to defend), is advised as follows: 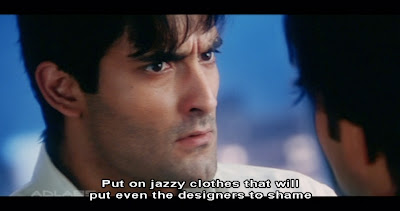 He comes up with these: 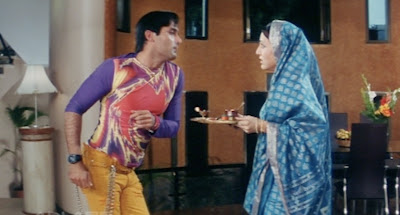 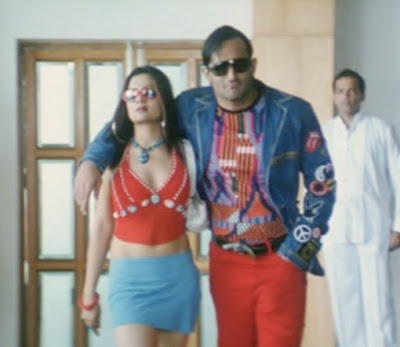 Bravo (and to Ferzine Khambatta, whom the credits labels as Akshaye's costume designer)! Marijuana, peace, and Rolling Stones patches are standard-issue rebel, but along with the Playboy bunny he has a swastika - and not the Hindu kind, I don't think, since it's black and in a white circle on a red background, though I'd be delighted to be corrected - on the elbow.

Okay, next we have another example of overused accessory-itis. In "Mundeya," Akshaye wears five versions of basically the same stupid hat. At this point in the plot he's rid of the fiancee, so there's no reason for him to be dressed like this. Maybe to highlight what a mismatch his character's advertising executive hypochondriac is for Mallika's "international model" mafia princess? 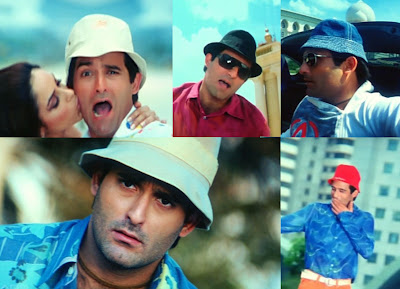 Even with all of this, most of the time Akshaye and Ayesha look very normal, him prepped out (drool drool drool) and her in very pretty salwaar-kameez or non-crazy western clothes. And boy howdy do they both rock the glasses! 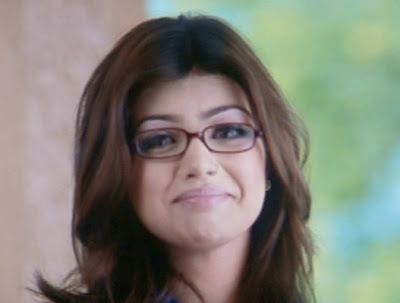 (I could not love him any more right here. Sigh.)

And you know who else looks really good in this movie? When he's not dressed in the most conservative items from this month's International Male catalog, Aaftab Shivdasani looks very handsome and classy, as in a wedding scene here. 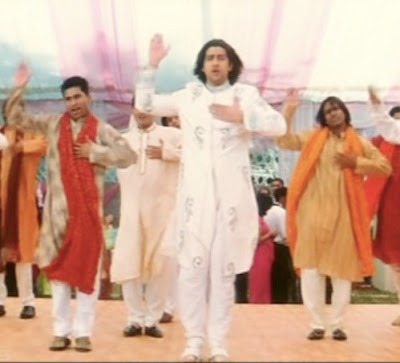 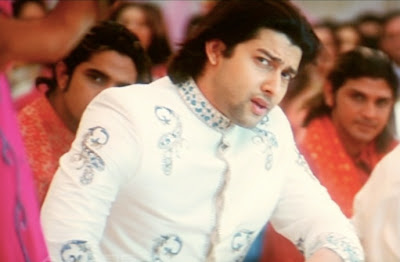 Careful inspection of the credits revealed that he's listed as doing some of the costume work for the movie. Nice! So between this outfit and Akshaye's preppyness, Shaadi Se Pehle actually ranked quite high on the yum-o-meter for this reporter. Still, I do recommend you close the windows as night so that the giant sparkly moth on Ayesha's jeans doesn't come in and chew up your closet.
Posted by Beth Loves Bollywood at 5:51 PM 7 comments:

Bollywood Fugly lesson #6: fugly is as fugly does

Ne'er a truer sartorial reflection of personality graced our fair screens. Smug bully Raj is so not Robin Hood, despite his forest-ready merry lace-up top.

Of course, Rohit also gets inflicted with a sleeveless green wonder; here I like to imagine that his dalliance with outlandish clothing is just growing pains as he gets used to life post-Jadoo. 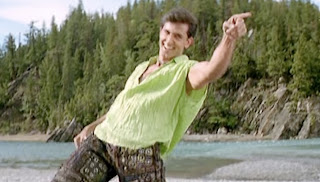 (Personally I liked the preppy Rohit better anyway, even in yet another sleeveless green piece in the top photo. What's with this theme anyway?)
Posted by Beth Loves Bollywood at 10:25 PM 3 comments:

Last night on The Colbert Report on Comedy Central, Stephen Colbert did a bit on celebrity feuds. After Trump & Rosie, Jolie & Madonna, he finished it up with a fantastic bit on the apparent feud between Amitabh and Shah Rukh (Big B didn't go to SRK's New Year's Eve Party...!) with pictures, shots of all the other Bollywood stars who did go, video clips comparing them from Mohabbatein, and finished up with a reference to Dillip Kumar and Raj Kapoor.

Now, I found the clip online, but you have to slide the bar just over halfway to get to the section about Bollywood. Enjoy! I know you will!

1/11/07 UPDATE - Many, many thanks to Anangbhai, who uploaded the precise segment on Google Video!

Is your week lacking in amazement? Fear no more. Anytime I need a little brain-shock, I watch a clip of this song. (I know it hurts at first but you'll feel a mind-numbing sense of peace by the end.)I like this raggedy little movie for what it could have been.
This routine is one of the main reasons Yaadein was struggling. There are 200 silly things going on in this clip. Can you find them all? ;)
Posted by t-HYPE at 11:34 AM 8 comments:

A few days ago, I came across this slide show on Rediff.com, highlighting "films to look forward to over the next [twelve] months." A number of these films look quite interesting, but that's not what I want to point out to you, dear reader. 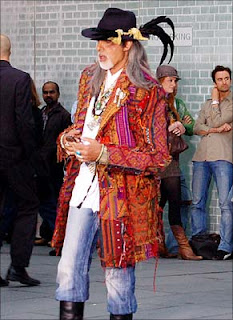 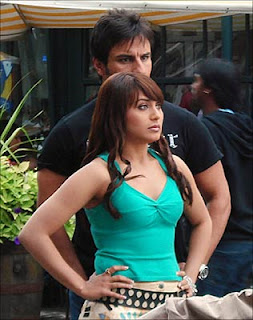 Gah! Between the yin-yang emblazoned ninjas (and she-ninjas), and the fanning, bowing, cheomsang-wearing Chinese ladies, straight out of the Background Casting for Dummies textbook, the only redeeming fug-factors in this song picturisation are Akshaye Khanna-- who doesn't even dance a single count-- and Upen Patel… though it looks like his wardrobe came from the Backstreet Boys' going-out-of-business sale.

I think my dance troupe needs a pack of back-up ninjas...

It's all about the Baadshah baby...

While I've been reeling under the demands of a new year, so overburdened that my movie viewing has slipped to a mere two films a month (!), one of our faithful readers has rescued us from the dreariness of carefully planned, understated outfits--clothing without excess. Thank you Adeline. We are indebted to you and the costume designer for our Baadshah. 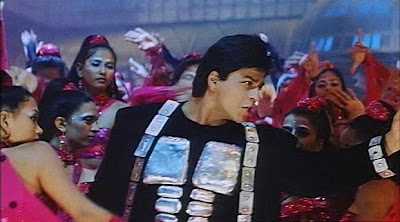 Um, does this outfit say, "Thrift-Store Phantom of the Opera" or is it just me? 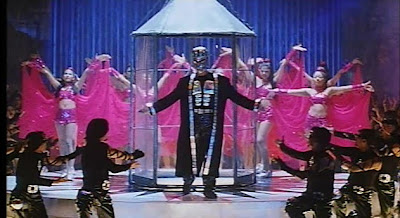