You've heard me use the term repeatedly: Uncle Chest. Several of you have asked me to explain, "what is this Uncle Chest you speak of?" Well, I'll explain, but not before making the guilt-inducing statement, that in order to offer an illustrative explanation I have had to suffer way more Salman Khan than I ever, ever, EVER wanted to. I hope you're happy...

(don't encourage him, he'll strip for absolutely no reason!)


Uncle Chest is like this: Salman Khan is 40-some years old. Technically, an "uncle" to most of the girls he's cast opposite, or trying to attract at the box office, and certainly older than one of my uncles. So the fact that he habitually takes off his shirt in every single movie he comes in, within the first 4 minutes... it's just plain icky. I mean, the fact that he's had hairplugs, and the fact that he's pimping the hairless-oiled-dude shtyle, ala 1986, is just sooo soooooooo icky. I would rather see my dad run around with his shirt off than Salman Khan. And my dad is "uncle" to my peers: Thus, Uncle Chest. It's my way of saying "dude, you are TOO OLD! Put your damn clothes back on because NOBODY wants to see your fossilized old man bod!" Seriously, in most states, old men who flash young ladies wind up getting arrested.

That's not how you fix a sink, moron.

no really, Bob Villa, it was totally necessary to take off your shirt and use it fix the faucet, as opposed to teflon tape or a wrench or something.
Exhibits A thru Q: 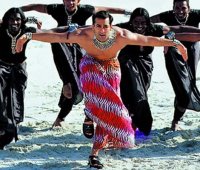 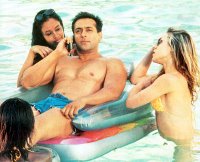 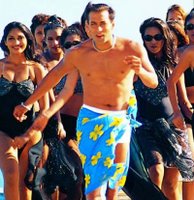 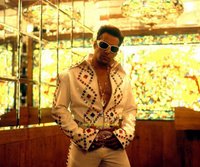 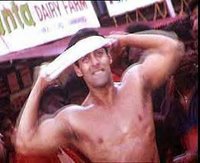 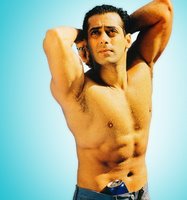 there are no words to describe how NOT-thirsty for soda I am right now.
Towels, short-shorts, faux-tribal costumes, capri pants!?! Didn't anybody ever explain to him that the mystery of the body is sexier than overt exhibitionism? (and denim short-shorts!) There are more, many more, but my eyes started bleeding and I couldn't bear to look at any more evidence without incurring a copay. 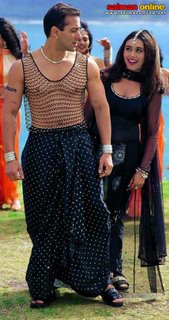 SK: what? I'm not shirtless!
Rani: you're joking, right? 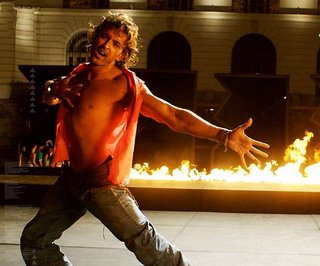 Oh. My. Stars. Ew. Well said, DesiDancer! The mesh thing with Rani is the worst offender, I think. Mesh generally is bad, but it's much worse here.

Babasko, how on earth are you going to defend him this time?

I agree, the mesh-y thing is truly messy.

DD, you forgot this from Pyar Kiya To Darna Kya.

"the mystery of the body is sexier than overt exhibitionism? (and denim short-shorts!)"

oh no DD you got this all wrong.

MY EYES! Oh, the mesh thing is so, so wrong. Poor Rani.

So if George Clooney took his shirt off, would that qualify as uncle chest, because he and salman are the same age?

Or are only Indian people funny to laugh at.

I'm going to have to call Clooney an uncle. It's just that he doesn't have to whip off his shirt in the first four minutes of every project he does, and then repeat every 12-15 minutes for the duration of said project. Clooney spends more time acting than stripping.

then again, looking at Syriana, he's looking pretty uncle-ish, too ;)

Pooja- don't even start me with the videos, or I'll have to devote all my blogging to this topic.

Babasko- there is nothing to say. It's a complicated NASA logarithm which weighs age versus number of shirtless incidents in relation to the potency of steroids and hair thickness of each strand of hair-plugs. in a nutshell, F, U, G-L-Y: your boy ain't got no alibi! He's fugly.

Maybe one of you can explain this to me...

Uncle Salu almost always wore an earring in his right lobe..gay no?

Hey excuse me ... but dude does got a well built body to show.. so he shows off..espically comparing to all youngster ..keeping himself at this age.. u have to give that to him..and abut his shirt coming .mashallah... U know UR HOTTIE "HRitiK ROshn" takes advice from salman and he is trying to copy that ISHTYLE in DHOOM...

m k...see thats what i am always saying. that roshan boy is only a mere clone of our salman

i NEVER said that clones were a bad thing....

OK, shoot me now, but Salman and Shilpa look HOT together...

k desidancer,
dude whome u r comparing man? hrtk vs salman... not to mention our actors were coming all fully belly tight pants, long hairs, till salman came.. he started the whole metro sexual thing.. in early 90s he came with frekin 19" arms... and u r comparing this young hrtk roshan to a 40 yr old guy. no to mention salman has a full proportion body till this age .. comon now.. even hrtk admitss that he call up salman for fitness tips.. u all have to agree the REAL man is salman... and i am not even taking upen patel.. these r young folks but salman is still the best ..he have is own style and not to mention UNDER TOP 10 most good looking guys in AMERica... so these young guys are no way near...

MK.
please to submit URLs and similar hard-evidence of Hrithik Roshan calling up Salman Khan for fitness and physique tips. It certainly wasn't for dance and fashion tips.

whatever u r ... those all are simple dresses by stylists and fashion designer.. big deal...if there are couple of crore riding on my films, ofcourse my crew will look after me, ismein fashion tips kya hai... also about dancing hrtk have an extra thumb plus he was diagnose with "scoliosis", ofcourse and extra long spine. Somehow it turn out to be useful ....aneways ... ur hrtk still stays in his place while dancing and gliding thru flops.. u will see salman with every hit or flop in some years... baat wohi howi na.. purana chawal purana hi hota hai... nayee qapas kabhi kharab bhi hojati hai .. :) conov over desi dancing chori.. :D bye

Wow, Salman is starting to look like Sanjay Dutt! Which is fine, if you ARE Sanjay Dutt, but kind of sad for a purported love god.

Salmann is a short dude.. and he can never look lean and tall! :D

and nowadays he's gone quite fat!

salman is still the best...

100% desh se chokri? Correct me if I'm wrong, but you aren't fully Indian are you? So you can't claim to be 100% chocolate goodness from the desh, like the rest of us.

Run away, Delfino. Run. Away.

Oh I'm sorry, let me diagram the sentence for you, since you made the olympic flying leap to a conclusion. I was being called dude. I said please don't call me dude because I'm 100% CHOKRI. I make no illusions about the fact that I'm mixed and not 100% desi.

WHAT THE FUCK. the actors dont get to pick what they wanna wear or what they wanna do. the director does. so quit bothering the actors. plus would u rather see a hairy chest, or a hairless one. and have u seen any recent hollywood film. they're just as bad. i love how you said that u like indian culture and heritage but i dont see it in you anywhere.

He dresses like a fool on his own time, too.

I doubt if ure dad or any of ure uncles got a chest like salman ure so called uncle chest.
Who cares if he is 40is as long as he looks kewl.

the girl who wrote the article, is a bloody whore...salman is not just about his body..its the way he carries himself... its the person who lies in his heart than what he looks like...

Plus, he's is kinda good looking..and at his age..he still rocks!!!

IE Salman Khan isnt called salman bhai by all just for the heck of it, hes a brother to most and an idol to the rest..

Lil bitch, please, put the cork in your lil mouth..

The fact that you would rather stare at your dad's naked body tells me theres something really messed up with you mentally.

I think you need to see a psychologist instead of writing a blog on the internet trying to humiliate others. Look in the mirror before pointing your fingers at others.

I wonder what you look like. He gets paid to take his shirt off... and you would most likely be paid to keep yours on or glued to yourself.

Jeez Anonyomous, just chill. It's a blog designed to make people laugh at the garish clothes (or lack thereof, in Salman Khan's case) that Bollywood stars wear. No need to get all 'ur mentally sick etc etc'.
RELAX BRASS!

thanks for this info, great thing and event

My name is Md Razib Hossain. I am from Bangladesh 🇧🇩.Salman Khan is the best.