Doosra Aadmi (1977) features not one but two of the Kapoor dynasty princes, Rishi and Shashi (son and brother of Raj, respectively, for those who have not mapped out the Kapoor family tree), as well as Rishi's princess Neetu Singh.* I know this blog isn't for fashion dos, but I cannot resisting contrasting the male stars, who demonstrate why, in some cultures, age, with its wisdom from experience, is so venerated. For the most part, the clothes in this movie are unfuggable (and maybe even tied to plot and chacater development, but more on that in my regular blog); they are 1977 in the good way, and even our hero Rishi gets normal-looking suits that elicit no comment. But then about halfway in, while taking a drive in the country, a most mysterious phenomenon occurs: Rishi somehow manages to look simultaneously like John Belushi, Woody Allen, and Harry Potter.** 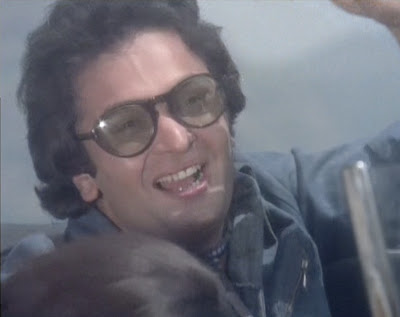 It's worse from the side. 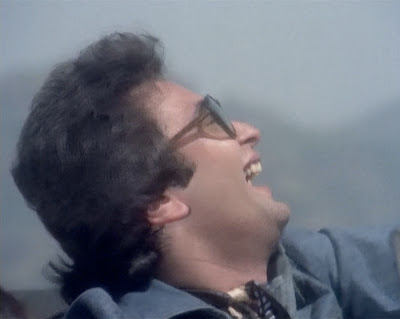 Then just a few moments later, in the very same scene, he manages to channel 70s poster boy freshly-scrubbed cheeriness, with his dreamy stares and jaunty scarf... 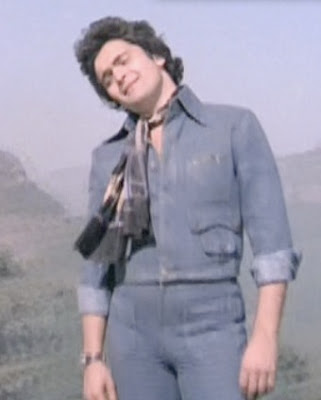 until he holds his arms up too high for his cropped jacket and gives us a little muffin top. 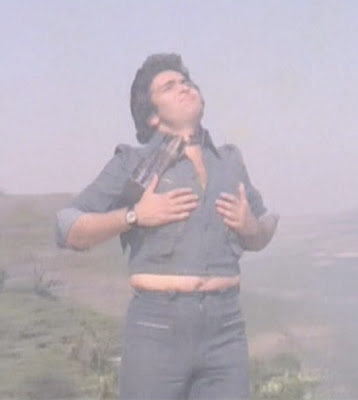 Most of us would have muffin tops in a jacket and pants like that, which is why we here at Bollywood Fugly work so tirelessly to point out to costume designers how careful they must be.

On the bright side, however, we have the older and wiser Shashi (and my new FPMBF runner-up, by the way) showing us that a tank top, dress shirt, and leather jacket can be very successfully coordinated with just the right scarf (especially in the classic three-quarter turn, outstretched arms, coming-out-of-a-spin pose) 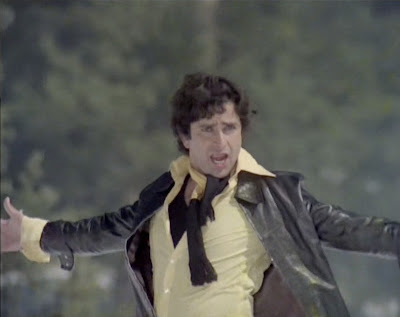 and that, depending on the uncle in question, maybe a little "uncle chest" can be a good thing. 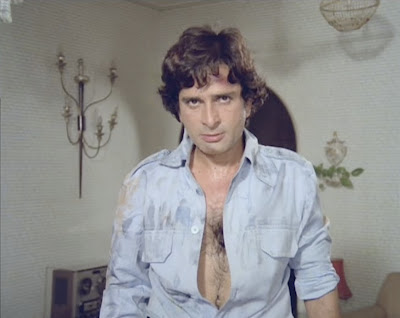 * The women in this movie got great clothes and generally looked 1970s classy, so I don't include them here.

** There are a lot of really big sunglasses in this movie, and generally speaking I like them, because they're 1) fun and 2) appropriate for the feeling and era of the movie. I'll be posting many more images of sunglasses and scarves in my write-up later this weekend.
Posted by Beth Loves Bollywood at 11:49 PM

I like that Rishi's cupping his own moobs there, too.

Oh god. I have a raging cold and you just made me spit a blood covered loogie from all the laughing.

Ok, not appropriate but that last picture of uncle shashi

@last Picture: Damn indeed. Reminds me of Kaala Patthar, where Shashi gets to run around sweaty and scruffy all the time *g*

mwahahaha... Rishi DOES look like Harry Potter and Woody Allen but most of all like John Belushi - I thought of John Belushi even before I saw the caption :)

Man-boob-cupping not such a pretty sight for us girls...

That shashi kapoor with the scarf picture should really be part of a long-running dirt gay caption contest.

I just saw Rishi in the gym this morning with a personal trainer. He's so not happy to be working out. Thanks for nothing, b-fug.

What's name of the song from which the first Shashi picture was taken?

great knowledge you have given to me
thank you