Not Exactly Fashion, But Certainly Fun!

recovering baptist just brought this fantabulous site to my attention - you can subtitle snippets from Bollywood films!

http://www.grapheine.com/bombaytv/index.php?module=see⟨=uk&code=8e08b7defe1fc0d0338ead2bc73a6ebb
Posted by Susania at 10:56 AM No comments: Links to this post

At Ugly, Ugly, Bollywood Fugly Fugly, we often don't document celebrities "in the wild," but this past weekend's Filmfare Awards gives us a few gems we just can't pass up: 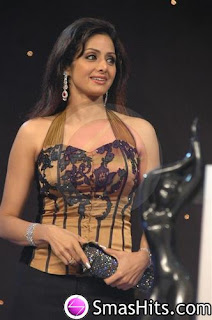 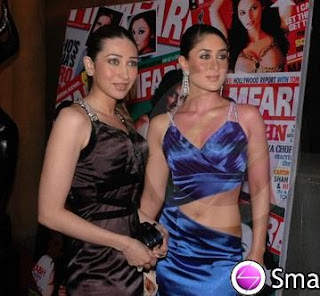 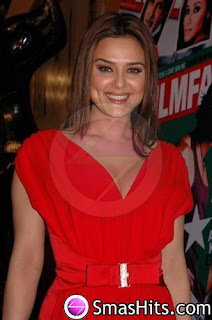 And again, what's with the unfortunate costumes on the backup talent? 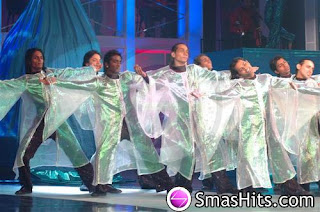 (Yes, I know there's lots of fugly in this song including, but not limited to, Juhi's mini-skirt and pumps, Aamir's high-waisted jeans, and the worst dance moves ever.)
Posted by Pooja at 3:09 PM 4 comments: Links to this post

Too good to let pass.

I have no idea what film it is from. And I am dying to know.

My heartfelt thankyous go out to Kaddele from Missionbas.de for finding it.
Posted by babasko at 9:01 AM 24 comments: Links to this post

[Click any fugly photo to enlarge.]
I realize Indian came out in 1996, but I doubt these looks were completely acceptable even then. Kamal Hassan is a fabulous actor but he isn't exactly known for his dancing. So you can only imagine what these outfits looked like in motion. People ought not dress good actors so poorly.

Before we examine the abuse heaped upon Kamal, I would like some sort of explanation as to why these backup dancers look like Cats meets Miami Ink... 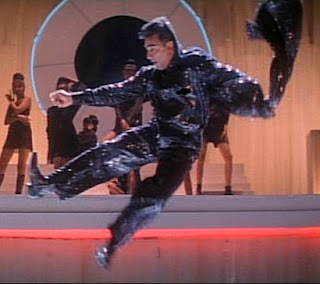 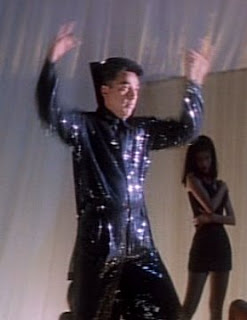 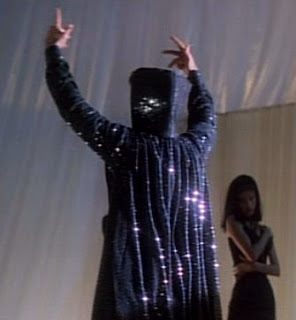 
But then there's grandma's flowered shirt impeccably bow-tied at the waist to show off Milli Vanilli biker shorts complete with "Buh-buh-buh-buh-baby, don't forget my number" moves.

Yes, Kamal, we here at Bollywood Fugly are just as perplexed as you are about your co-star 's clip-on braided ponytail and the fur balls she's wearing as part of her bustier. No, those glasses aren't prescription... 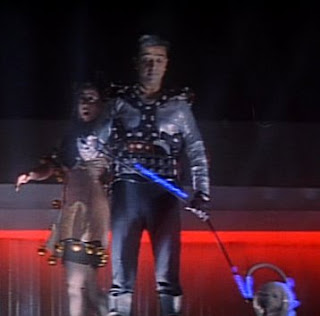 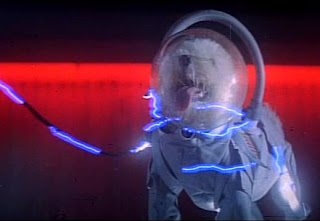 [I think this was an attempt at "doing the robot" but they ended up with the "Tequilla" instead.]

Maybe this is where Shilpa gets her animal prints? 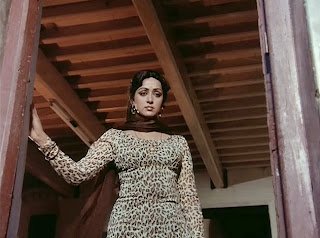 In This Corner: The Big B

One of my absolute favorites, Amar Akbar Anthony has the sheer exuberance that has always typified the best Bollywood films. Fantastic, charming, ridiculous and altogether hilarious, it will always be in my top ten Bollywood films.

That said... have you SEEN Amitabh's wardrobe in this film? Two Words: Lea. Ther. 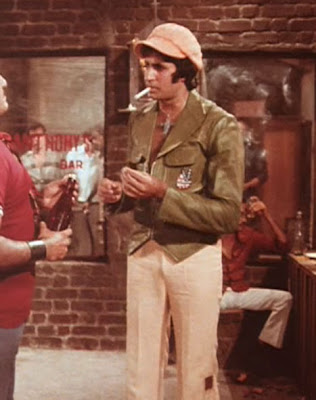 First we see Anthony in his bar dealing with a tough customer. Just the jacket, folks; no shirt required! Note the crucifix. 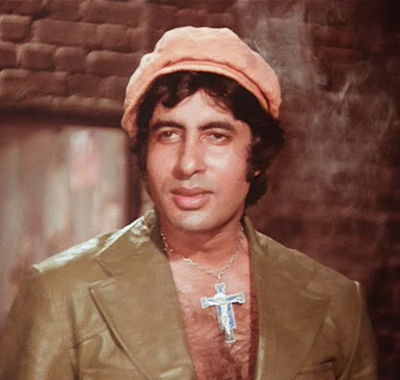 Next, we have his concert-going attire... again, leather jacket, no shirt. And the crucifix has changed to an Egyptian ankh. Why? No idea. 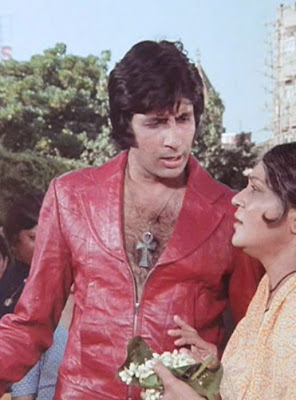 Finally, we have his shopping ensemble. When shopping with your fiancee for her wedding dress, no shirt required! 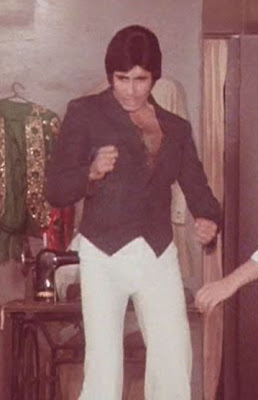 Posted by Susania at 9:50 AM 5 comments: Links to this post 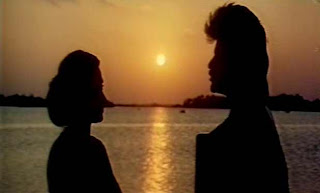 Need a hint? Tsts. Its from Jamai Raja.
Posted by babasko at 8:28 AM 16 comments: Links to this post

Rise to the occasion

I was looking for a special occation to reveal to you, treasured readship, a sparkling jewel in the annals of this award nominated (Whooohooo!) blog. And found that every day is a special day if you stumble upon fuglyness like I did watching DAUD:

Naah, that is no way to tuck your shirt in if you meet the heroine, but it is not that fugly if you compare it to....

THIS. Now this is what we call fugly. I am so very sorry that there seems to be no clip of it on youtube. There is this Yodeling part in the bridge of the song (tum mein hal dum) you need to hear to get the full impact.

Oh, and can anybody tell me what´s with the giant cockroach in the back?
Posted by babasko at 1:20 PM 7 comments: Links to this post

They're not laughing with you...

Oh dear, where do I even begin with this... Are we allowed to fug sets as well as costumes? Because if we can, I think the Taj Ma-Phallus stage for this show is hysterical.

But that's just the jump-off!

Who is that masked man? Is it Optimus Prime? 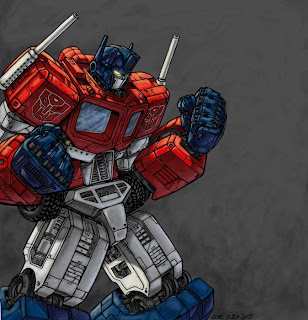 Is it Voltron, Defender of the Universe? Is it an anime villain?

Oh hell, it's MUCH worse!! It's Salman Khan dancing~ aaaaaahhhhhhh!

Sallu dear, they're not laughing with you, they really truly are laughing at you. Just look at the expressions on the audience's face-- they're horrified! Though, in your defense, it may be because the back-up dancers pulled the "one-leg-up-dog-peeing-on-fire-hydrant-then-hump-the-floor" move. Dude, that is SO last year's pageant circuit.

It only gets worse from there. Don't believe me? Forward to 6:50 for the "Madonna Move" [thanks Amir!] *not suggested viewing if you plan on eating in the next 20-30 minutes. Protective eyewear also recommended.

Posted by DesiDancer at 10:36 AM 3 comments: Links to this post

Shilpa Called and She'd Like Her Other Sari Back 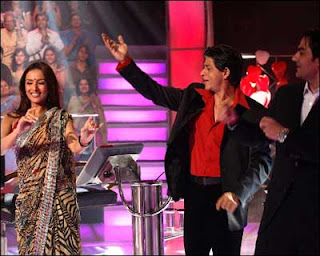 After Ms. Shetty having been raked over the coals recently for her choice of not-so-purrrfect, leopard-inspired sari, it was a surprise to see the style maven Mrs. Malaika Arora 'Chayya Chayya' Khan appear tonight as one of the celebrity guests on SRK's special Valentine's Day episode of Kaun Banega Crorepati, in a very similar schmatte, though this one veering more toward tiger stripes.
Posted by Filmiholic at 9:09 PM 4 comments: Links to this post

Whatever your feelings about the young writer/film maker, we know you will ALL appreciate Bollywood Fugly's Karan Johar Drinking Game: Valentine's Day Special (TM).

So, pop your copy of KKHH, K3G, KHNH, or KANK into the DVD player, grab a bottle or two (or three) of your favorite potent potable, and...

Take a sip when:
... Shah Rukh Khan stammers.
... you spot a geographic inaccuracy.
... Amitabh mentions "family" or "tradition" (or any Hindi synonyms).
... any of the lead actresses does a hair swish.
... any character makes a reference to "phela pyar" (first love).
... tears appear in the eyes of the leads.
... any self-referential movie music theme plays.

Take two sips when:
... any character makes a reference to the dichotomy between "east" and "west."*
... Shah Rukh Khan's eyebrows turn into a tilde (~) during an emotional scene.
... you see a bevy of tall, skinny blonde girls as backup dancers.
... a small child is referred to by an awful nickname (Laddoo, Fattoo, Sweetoo, Chunky, Twinky, Rinky, Minky, Poo).
... any character makes a reference to homosexuality or "The Gay".

Down half your bottle during:
... any 500-extra dance extravaganza.
... a singing of the Indian national anthem, or similar displays of nationalism.*

Finish the darn bottle when:
... you spot the tricolor, especially on clothing.

Put your own "rules" in the comments! And happy Valentine's Day!
Posted by Pooja at 3:37 PM 36 comments: Links to this post

The Colbert Report continues its Bollywood affection for Amitabh Bachchan, by naming him the Alpha Dog of the Week! Although the turban Stephen dons isn't correct...
Posted by Susania at 2:19 PM 12 comments: Links to this post

OK, now, Sunny... your hairline is not receding yet, so far as I know. So there's no need for such sartorial attempts to hide your hair.

What, then, could be the impulse behind this do-rag? Is it a misguided effort to jump on board the popular Pirates of the Caribbean? 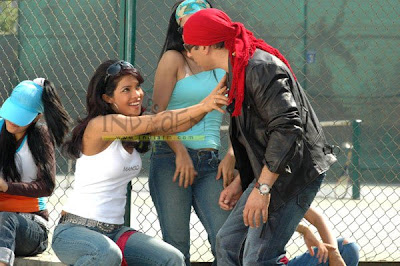 "Sunny, if we're going to be paired in a movie, I insist that you wear a bandanna. I want to pretend you're Johnny Depp."

Posted by Susania at 12:36 PM 5 comments: Links to this post

OK, so we all didn't agree on Kajol here.

Where do we all stand on this fashion disaster, also from Yeh Dillagi?
Posted by Pooja at 2:07 PM 12 comments: Links to this post

I definitely wanted jeans like this in junior high - I don't recall what this particular button-way-up-then-fold-over waist style is called, but I certainly remember pale blue acid wash - and if I had bold enough, meek high school freshman that I was, I probably would have tied a sheer scarf through the belt loops when I was feeling extra sassy. 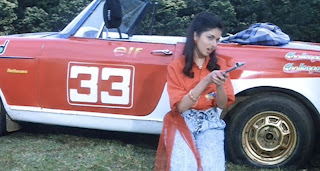 Doesn't the not-our-heroine girl remind you of Jennifer Grey? Nobody puts Seema in a corner! 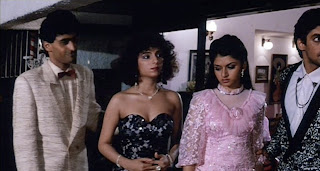 I'd also like to point out that Salman's shirt collar accoutrements. I've never seen anything like this piece of man jewelry before, and I've done my share of country line dancing. What are those, exactly? Weights to keep his collar from flying up (as it will do in later wind-swept songs)? 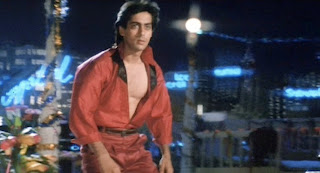 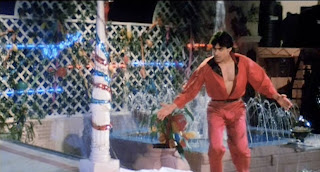 Posted by Beth Loves Bollywood at 9:54 PM 7 comments: Links to this post

Now that's a fashion do!

A piece of apparel saves Amitabh Bachchan's life. You can't make this stuff up.

Thanks to Army of Monkeys for the tip.
Posted by Beth Loves Bollywood at 7:39 PM No comments: Links to this post

Picking on Mithun's outfits in pretty much any of his films is pretty easy, but then, some things simply demand that they be done. Case in point:

OK, we're a bit pulled back for this shot, but you need to be so in order to take in the whole picture. Obviously, the first thing that catches the eye would be the banana yellow pipecleaner pants that are so tight even Joey Ramone would be uncomfortable in them. And who wears a scarf with a t-shirt? I mean besides, apparently, 80% of Bollywood?

Unfortunately, the video is of poor quality so you can't really make it out, but his shirt says "Super Disco" in sparkly letters.

Hers is a timeless classic, I think we can all agree.

My digging has, so far, unearthed... 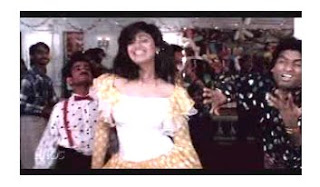 Feel free to post more links in the comments of this post, especially if you can find something more heinous than Shilpa's Union Jack "bib" and elbow warmers.
Posted by Pooja at 2:01 PM 16 comments: Links to this post